The aircraft that would become the Beechjet 400 was originally designed as the Mitsubishi MU-300 Diamond, an all-new, all-jet development to complement and slot above the Mitsubishi MU-2 and provide Mitsubishi Heavy Industries with their top-of-the-line corporate aircraft model (hence the name “Diamond”). Beechcraft bought the production rights in 1985 and began manufacturing it as their own aircraft model, initially re-designated as the Beechjet 400. Beechjet eventually upgraded the 400 to the 400A, which eventually evolved into the successful Hawker 400XP.

The Beechjet 400 offers a streamlined private jet experience that includes the necessities of private travel while offering the convenience of short-range flights for those going from city to city.

The Beechjet 400’s cabin measures 4.9 feet wide, 4.8 feet high, and 14.4 feet long for a total cabin volume of 293 cubic feet. Passengers have only 12 cubic feet of internal baggage volume to access in-flight, though there are an additional 33 cubic feet of storage accessible externally. It can seat up to seven passengers.

Beechjet improved upon the Diamond design by adding two Pratt & Whitney of Canada JT15D5 turbofan engines, which power the jet to a high speed of around 513 mph and a range of about 1,140 miles. It can travel at heights of up to 45,000 feet, and has a maximum payload of over 2,000 lbs. 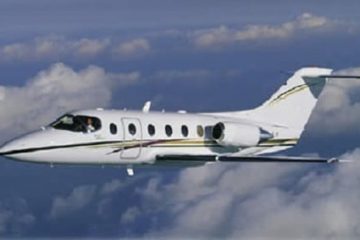