Nearly 30 years ago, the Cessna Citation Ultra cemented its place among the elite in all of private aviation. As an updated version of the Citation V, the Ultra is an economical and spacious business aircraft designed to provide passengers with comfort and relaxation. Optimal speed and takeoff distance, as well as a pilot-friendly avionics suite, make the Citation Ultra a top contender in its class. It was first introduced in 1994, and later that year, Flying Magazine named it “Best Business Jet.” Though production ended in 1999, the Citation Ultras on the market today have been praised by corporate clients for their durability and for the simplicity of their systems. Eventually, the Citation Ultra was upgraded and replaced by the Citation Encore.

The Citation Ultra boasts what was at the time of its debut the longest cabin in its class at 17.3 feet in length. The interior’s 4.6-foot height and 4.8-foot width feel even larger thanks to a design that incorporates mirrors, seamless wall panels, and indirect lighting. Up to eight passengers can fit comfortably, typically in a double-club configuration of all-leather seats that can recline, track, and swivel. With the optional refreshment center and forward closet, the number of seats goes down to seven.

To keep passengers entertained while in the air, the interior is equipped with individual flat-panel entertainment systems. Folding tables allow those aboard to stay productive during their flight. The Citation Ultra can carry up to 600 lbs. of luggage split between a 41-cubic-foot external storage space and a 26-cubic-foot internal one—Cessna says that’s three times what the King Air 350 offers. The jet also features a fully-enclosed aft lavatory.

Powered by a pair of Pratt & Whitney Canada JT15D-5D turbofan engines which each produce 3,045 pounds of thrust, the Citation Ultra can climb to its maximum service ceiling of 45,000 feet at a rate of 4,100 feet per minute. These engines give the Ultra outstanding fuel efficiency, consuming 195 gallons of fuel per hour. With four passengers and NBAA IFR reserves, the Citation Ultra has a range of 1,524 nautical miles; that’s enough to take travelers effortlessly from New York to Chicago without any fuel stops along the way.

One great selling point of the Citation Ultra is excellent short-runway performance; the light jet can take off in just 3,200 feet of tarmac, even when loaded to its maximum takeoff weight of 16,300 lbs. The wing is a major upgrade over that of the Citation V—Cessna collaborated with NASA to develop an improved straight-wing design that increases speed and stability while reducing drag and improving airflow.

The Citation Ultra is equipped with all the necessary instruments for a more efficient and safe flying experience while up in the air due to its pilot-friendly avionics suite. The cockpit features the Honeywell Primus 1000 digital avionics package, a simple system that consolidates many displays into fewer panels for reduced clutter and pilot ease—it brings the Citation V’s five panels and eight analog controls down to just four screens. Upgrades over the years have included additional systems like those for terrain and traffic avoidance. 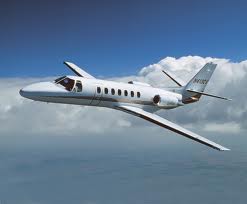