Outperforming most midsize private jets, Cessna’s Citation XLS is an updated version of the Citation

As the largest jet Cessna has ever created, the Citation Hemisphere is bound to turn

After delivering its 7,000th Citation worldwide as of June 2016, Cessna continues to redefine the

Similar to a large jet, the Cessna Citation Sovereign has long-distance range that allows it to fly

Once known as the fastest mid-sized jet in the world, the Cessna Citation X is only

Meet The Citation X+: The Fastest Business Jet On The Planet

As hard as it is to believe, calling the Citation X+ the fastest business jet on the planet is actually an understatement.  To be correct,  The Citation X+ is the fastest non-military grade jet there is.   However, speed isn’t the only feature to this aviation icon that can reach an unparalleled Mach .935.

You alreadty know what comes to mind when you think of private jets.  Wealth, luxury and an exclusive lifestyle are probably among them, but there are many things you may not know. Here are five things you probably didn’t know about private jets. 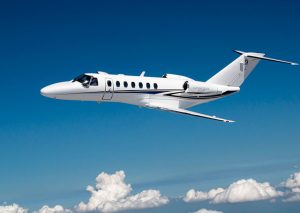 Cessna Aircraft Company announced today the successful maiden flight of the first production unit of the Cessna Citation CJ3+. The CJ3+ flew from the company’s manufacturing facility to Wichita, Kansa. About a 73 min voyage from point A to point B. According to the test pilot, the aircraft performed perfectly as expected.

Cessna announced this week that the first updated production Citation X has emerged from the factory hangar in Wichita, Kansas. In 2010, Cessna announced plans for an update to the Citation X that would be called the Citation Ten, later deciding upon the “new Citation X” as the name for the updated model. They plan to reclaim their crown as the world’s fastest civilian aircraft with the “New Citation X”. “Speed is the reason for flight. It was true for Clyde Cessna in 1927, and it’s true today,” said Scott Ernest, Cessna CEO. “The Citation X is the perfect aircraft for customers wanting to move faster, be more efficient and get where they need to be more quickly than ever before.”

(Image courtesy of AOPA.org) Cessna, a leading manufacturer of private jet aircraft in the United

Private Jet Industry Has the Backing of Ray LaHood

Coming on the heels of a visit to America’s aviation-Mecca, otherwise known as Wichita, Kansas,

A 19 year-old fugitive is wanted by the FBI in the Bahamas. Colton Harris-Moore is a teenage thief who has been taunting police for over two years now. Colton has been committing burglaries and possible theft of boats, airplanes, and luxury cars. Recently he has been spotted in the Bahamas and the US embassy has issued a $10,000 reward for any information leading to his arrest. The owner of a stolen plane was contacted by the Coast Guard that his plane has been sending emergency signals off the coast of the Bahamas. Colton was the prime suspect and he was nowhere to be found when the plane crashed. Sounds like Catch Me If You Can, a 2002 film starring Tom Hanks and Leonardo DiCaprio. If the owner of the plane used Magellan Jets, he wouldn’t have to worry about theft related issues.

Recently we blogged about, Colton Harris-Moore, and early Sunday morning he was aressted on the Bahamian

Cessna Cutting Back in More Ways Than One

Cessna began issuing layoff notices to 1,600 of the 2,300 employees that will lose their jobs by the end of June.  On top of the layoffs, Cessna has decided to shelve what was to be their new top of the line aircraft, the Columbus.  Cessna is also closing The Bend, Ore, plant it inherited through the acquisition of Columbia Aircraft.  CEO, Jack Pelton said that suspending work on the Columbus was difficult, but they need to be realistic in current economic times.  They expect to refund around 50 million in deposits on the columbus.

Cessna Aircraft continues to lower its production through 2009 into 2010.  This results in another round of layoffs scheduled to occur in July.  Their credit market, Textron, says that the much of the companies market continues to soften in the current economic state.  Textron did not release details about the next layoff round but full details are expected to be released at the end of the month.  The company has eliminated twenty-five plus percent of its employees in the last three months.  President and CEO of Cessna Jack Pelton has said that he has never seen an economic situation to this dynamic, but hopes recent news points to improvement.  Cessna remains hopeful, but knows that private aviation may be one of the latter points of the economy to be restored to those who have ceased use of it.