Boeing has recently unveiled the first 747-8 Aeroloft®, complete with Greenpoint Technologies’ separate cabin for sleeping quarters fitting 8 passengers. This addition makes for an estimated 400 square feet larger interior than the Boeing Business Jet 747-8. The total space of the cabin is an impressive 5,179 square feet; even greater than the Airbus A380 – the largest passenger plane in the world!

On Thursday, September 29, a drug sweep was conducted in Ridley Park, which is just

Boeing’s new engine variant for their successful 737 is the 737 MAX. This new group

Could this be the 797? Boeing Granted Bizarre Patent

Boeing was granted US patent Number 7,900,865 on March 8, 2011 for an incredibly unique and revolutionary type of aircraft. With a design the likes of which have never been seen in the commercial aircraft industry, Boeing may just be gearing up for the 797, the 737’s successor. The patent includes the following design features:

The image below from Boeing’s patent application shows what the new aircraft could look like.

Strange, yes, but there are many design aspects which will enhance the passenger experience for travelers around the world. The placement of the engines is sure to create the quietest cabin in the skies, as well as the quietest aircraft to those on the ground. With wings in the rear of the aircraft, incredible views will be afforded to passengers throughout the cabin.
Boeing has said nothing to confirm that this will be the 797, but rumors have it that the manufacturer and airlines have had discussions that a 737 replacement will have twin aisles for increased passenger comfort.
To view the patent which has incredible number of informative images, click here. 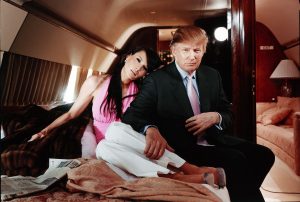 Boeing Rolls out new Queen of the Skies, 747-8 Intercontinental

Living a luxurious lifestyle is one thing, bragging about it is another. Paris Hilton this week has tweeted numerous times about her luxurious lifestyle-flying on private jets and shopping at Channel. She definitely likes to fly in comfort. As you can see below, Paris took pictures of herself reclining in a queen sized bed while on board a private jet. The private jet is a 1979 Boeing 747, approximately $270 million and owned by Sheldon Adelson, CEO of the Las Vegas Sands Corporation. What you may not know is that Magellan Jets can provide a private jet charter on aircrafts just like that. We pride ourselves on always finding the right jet for your charter, no matter your needs or wishes!

Australia’s Qantas Airways Ltd. said Friday it had canceled orders for 15 Boeing 787s and delayed the delivery of a further 15 aircraft due to turbulent market conditions.