The Bombardier Challenger 300 is one of the most well-respected aircraft in all of private aviation. With its impressive range, consistent reliability, and exceptional fuel efficiency, this business jet has dominated the super mid-size jet category since its introduction in 2004. Its large and roomy cabin offers passengers more than enough room for working or relaxing on non-stop coast-to-coast trips, and its low operating costs make it a standout option for flying those longer routes more economically than larger aircraft.

One of the most intriguing aspects of the Challenger 300 is the space offered inside the cabin, which measures 16.5 feet long, over 6 feet high, and over 7 feet wide. The jet’s eight passengers have plenty of room to stretch their legs in the double club-four seating arrangement. Fully adjustable seats with fold out tables and individual power plugs offer an ideal setting for working or dining.

The Challenger 300 is equipped with 12 windows, which provide plenty of natural light to the cabin. In addition, low-heat LED overhead lights with a 10,000-hour life and two-zone air conditioning all come standard in the Challenger 300, keeping both passengers and crew comfortable. For your baggage storage, the Challenger 300 offers a 106 cubic foot exterior compartment, providing space for up to 750 lbs. of luggage, golf clubs, or skis. The baggage compartment can be accessed with ease while in flight through the jet’s enclosed lavatory.

When it pertains to performance, the Challenger 300 is in a class of its own. Two Honeywell HTF 7000 turbofan engines power the aircraft, each producing 6,826 lbs. of thrust. The aircraft can reach an altitude of 37,000 feet in just 14 minutes, outperforming most aircraft in its class. Additionally, the business jet has a range of 3,100 nautical miles and a cruise speed of 540 mph.

As a leader in fuel efficiency, this jet can burn as little as 1,577 lbs. of fuel per hour when flying at a high-speed cruise. The Challenger 300 can depart from shorter runways than most super midsize aircraft, even at higher elevation—opening up a wider range of destinations. It can also comfortably cruise at an altitude of 45,000 feet, allowing the jet to avoid poor weather conditions and other air traffic. 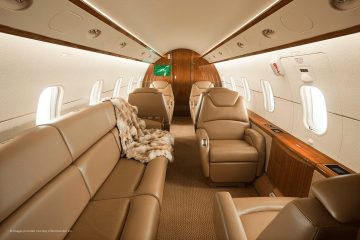