The Gulfstream G IV-SP is a fantastic large-cabin business jet that offers excellent performance and seamless travel on every flight. The SP is the successor to the G IV, the fourth installment of the famed Gulfstream family, and began replacing it in 1992. The “SP” in the name stands for Special Performance, and this aircraft is special, indeed—with its higher payload and landing weights, it offers improvements on an already winning model. It’s also a favorite of private fliers across the industry for its comfortable cabin and dispatch reliability. In a 2000 operator survey in Business & Commercial Aviation, one operator said, “Our passengers love the airplane. It represents home and security to them when they’re traveling overseas.” Production on the G IV-SP ran through 2002.

The G IV-SP retains the same impressive cabin dimensions of the G IV, allowing passengers to stand up, walk around, and stretch their legs—and thanks to a re-designed fuselage, there’s even an additional inch of headroom. Accommodating up to 13 passengers, the cabin has a height of 6.1 feet, a width of 7.3 feet, and a length of 45.1 feet, for a total volume of 1,525 cubic feet. Passengers also enjoy 169 cubic feet of internal baggage storage, all accessible in flight—more than enough space to fit the luggage of everyone aboard and more.

The typical layout of the aircraft includes three different cabin areas, which can be utilized for work or relaxation. Conference-grouped seating arrangements allow passengers to stay productive and accomplish business mid-flight. Thanks to a stretched fuselage, there’s room for six cabin windows on each side of the aircraft, letting in ample natural light. Luxurious amenities including a full sized lavatory with a shower and a large galley capable of serving a variety of meals all come standard.

As an intercontinental-range business jet, the G IV-SP can fly up to 4,109 nautical miles with IFR reserves and four passengers, and can do so at a high speed of around 480 KTAs. Two Rolls-Royce Tay Mk. 611-8 engines, each producing around 13,850 pounds of thrust, power the aircraft, burning around 415 gallons of fuel per hour. With a certified flight ceiling of 45,000 feet, the business jet can avoid most other air traffic and disruptive weather.

The main improvement over the G IV, though, is the G IV-SP’s increased takeoff and landing weight capacity. The G IV-SP’s maximum take-off weight is 74,600 pounds (1,400 pounds more than its predecessor), allowing more passengers, bags, or airborne office equipment to be brought along. Landing weight has been increased by 7,500 pounds over the G IV, too, giving the G IV-SP greater operational flexibility; crews can tanker more fuel for round-trips and avoid expensive fuel stops.

On the G IV-SP, dispatch reliability has been improved by replacing the G IV’s break-by-wire system with a hydro-mechanical one. Redesigned wheels and tires also give the aircraft smoother taxiing and runway performance and help contribute to the improved weight allowances.

Another improvement on the G IV-SP was made in the cockpit, upgrading the G IV’s Honeywell SPZ-8000 avionics suite to an SPZ-8400 system. Electronic Flight Instrument System information is displayed across six color cathode-ray tube screens, and a digital Flight Management System, Collins radios, and Honeywell laser inertial reference systems are also featured.
EXPLORE WAYS TO FLY WITH MAGELLAN 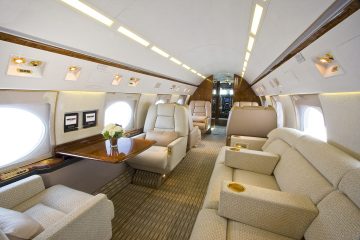