The Gulfstream G IV, produced from 1987 to 1992, was the fourth entry in the legendary Gulfstream family of heavy-cabin business jets and remains a favorite across the private aviation community. The G IV featured improved engines, an impressive avionics suite, a greater takeoff weight, and a more spacious cabin than its predecessors. Business Jet Traveler calls out the aircraft’s versatility, durability, climb rate, and low maintenance needs; passengers enjoy its intercontinental range, stand-up cabin, and luxurious amenities. This model heavy jet offers seamless travel on every flight.

Passengers aboard the Gulfstream G IV will enjoy a roomy interior designed for maximum comfort that affords enough space for its 13 passengers to stand up and walk around mid-flight. Compared to the Gulfstream G III, the G IV has an additional 4.5 feet of usable space. The cabin measures 45.1 feet long, 7.3 feet wide, and 6.1 feet tall for a total volume of 1,513 cubic feet. Its cavernous, 169-square-foot baggage compartment affords ample space for luggage and can be accessed mid-flight through the rear of the cabin.

On-board amenities include a full-sized lavatory complete with a shower and a large galley with enough space for two meal services. The rear of the G IV’s cabin can be converted into a stateroom, featuring one or two berthing divans.

The most significant advancements in performance from the G III to the G IV are the result of Gulfstream’s switch to the newer Rolls-Royce Tay engines. The twin Tays produce about 13,850 pounds of thrust each, and propel the G IV to a maximum speed of around 480 knots. They also make less noise, offer better operating economy, produce cleaner emissions, and improve fuel consumption by 15 percent. With four passengers and NBAA IFR reserves, the jet has a maximum range of 4,212 nautical miles.

The G IV utilizes a redesigned wing that weighs less than that used on the G III, while also holding 1,000 lbs. more fuel and creating less drag. The jet adds 2,000 lbs. to its predecessor’s takeoff weight for a total of 72,300 lbs.

The G IV is the first aircraft within the Gulfstream family to service Goodyear Aerospace’s brake-by-wire system as well as a steer-by-wire system to reduce pilot workload and improve maneuverability. 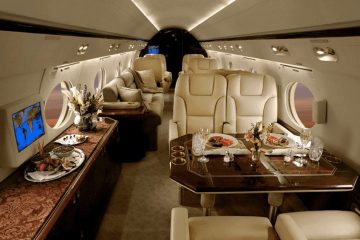