The Gulfstream G200 is a premium, top-tier business jet and a strong contender in the super-midsize category. Produced by Gulfstream Aerospace until 2011, the G200 is still widely in service today. This aircraft combines a large cabin, considerable range, and constant reliability; it is unique in that it operates at the cost of a mid-size jet, but offers much more space. It is the perfect choice for travelers who seek style, comfort, speed, and efficiency for their long-distance, cross-country travels.

The G200’s cabin is significantly larger than those of its competitors in the super-midsize field, providing a generous amount of space for comfort and ease. Passengers will have plenty of extra head and foot room in the cabin, which measures 24.4 feet long, seven feet wide and six feet high. The external baggage compartment is 125 cubic feet and can hold up to 2,400 lbs of luggage. Inside the cabin, there’s an additional 25 cubic feet of storage space.

There are two separate zones in the cabin, each with large oval windows that fill the space with natural light. The cabin can be configured in three different ways: two club sections with four seats each, a large club with conference seating and a divan, or a club section with another half club opposite the divan. Other cabin features include a radio phone and entertainment system, as well as power outlets for each passenger.

The G200 has an excellent climate control system. It is possible to control the climate in the cabin and cockpit separately through a temperature control system, allowing fresh air to be pumped continuously into the cabin, rather than recirculating the air. On a 113-degree day, the Gulfstream 200 can cool its cabin down to 75 degrees.

Considering its range of 3,400 nautical miles (or 3,910 miles), the G200 is the ideal jet for transcontinental flights. Dual Pratt and Whitney engines power the aircraft, each delivering 6,040 pounds of thrust. The aircraft can climb to 37,000 feet in only a matter of 19 minutes, and can fly at an altitude of 41,000 feet for long-range cruising.

The G200’s aerodynamic fuselage was designed with the help of 3D computer modeling, and its heavy wing load keeps it stable in a variety of weather conditions. In addition, the G200 features hydraulic-powered anti-skid breaks and a 100-degree nosewheel pivot capability for better handling on the ground. 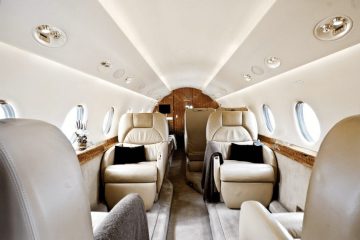