Despite succeeding Gulfstream G200 in 2012, the G280 isn’t a replacement, but rather completely new jet with features and performance that go above and beyond previous models. The Gulfstream G280 one of the fastest most powerful jet in its class, with increased speed and greater range that make it perfect for meeting both business and personal needs. With its impressive performance, passengers will reach their destinations faster, feeling relaxed and ready for the next journey.

The G280 features an elegant white leather interior with 19 windows, providing an inviting and well-lit environment—that’s four more than the G200. The door to the aircraft has a six-foot clearance and the cabin is over six feet high, so passengers will enjoy extra headroom and comfort. Featuring three different floor plans, the G280 can accommodate up to ten passengers in up to two living areas. The jet’s aft baggage compartment offers 120 cubic feet of space and can handle up to 1,980 lbs of luggage, while the vacuum-toiled-equipped lavatory’s 10-cubic-foot closet is large enough to hang clothing and garments.

The Gulfstream G280 Cabin Management System allows passengers to access and manage cabin temperature, lighting, HD monitors, and entertainment, all accessible via iOS app. Decreased noise levels and100-percent fresh air circulation make for a relaxing journey. Passengers can track navigation through Gulfstream’s CabinView moving-map flight information system. Once in flight, a standard acoustic curtain is available to be closed for further peace and quiet. A satellite phone is available, and Gulfstream offers the option of high-speed internet as well.

The G280 is the best in its class in terms of fuel efficiency, consuming 12 percent less fuel than other super-midsize jets. Along with reduced emissions, this jet has longer maintenance intervals, allowing for less time on the ground and more time in the air. One of the main differences between the G200 and its successor is the G280’s upgraded tail and wings. The aircraft has a high T-tail, rather than a cruciform tail. The wings are also larger and sleeker, allowing for reduced drag and enhanced lift during takeoff.

The upgraded wings, tail, and powerful engines increase the speed and range of the jet. Two Honeywell engines each deliver 7,624 pounds of thrust. The jet has the ability to climb to 43,000 feet in less than 23 minutes, has a maximum speed of 0.85 mach, and can depart from shorter airfields for longer-range trips than most super-midsize aircraft. The G280 can fly eight hours nonstop, meaning it is capable of flying uninterrupted from London to New York.

The G280 has supreme avionics technology, as well as excellent handling qualities. Aircraft control and handling is increased by state-of-the-art flight and navigation systems. Gulfstream’s PlaneView280 flight deck has three 15-inch displays that help to increase situational awareness and planning for pilots. In addition, the flight deck is equipped with Enhanced Vision System and Head-Up Display, giving pilots the ability to see terrain, runways, and any obstructions during low-visibility conditions.
BUILD YOUR G200/280 JET CARD 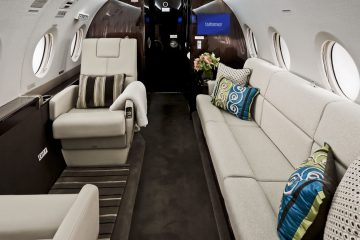