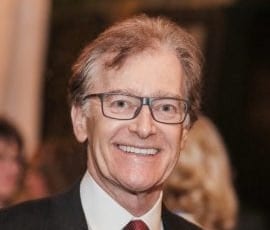 Harrison’s multi-faceted career brought him to Omnicom in 1992 when the firm he co-founded, Harrison & Star Business Group, the most successful and rapidly growing agency in the healthcare industry at the time, was acquired.  Harrison served as Chairman of the Harrison & Star Group and Chairman of Diversified Healthcare Communications, a group of eight healthcare agencies within Omnicom, until his appointment as President of DAS in 1997.  He was named Chairman and Chief Executive of DAS in 1998.

Harrison serves on a number of prestigious boards, including Montefiore Health System, Fifth Street Asset Management, Zynerba Pharmaceuticals, and Madison Logic.  He is a member of the Executive Committee of the Montefiore Health System, has served as a Fellow of the New York Academy of Medicine, and Governor of the New York Academy of Sciences where he served on the Sackler Global Nutrition Committee, a long-time passion of Harrison’s.

He served as co-chairman of the New York Chapter of the U.S. Olympic Committee and raised substantial funding to support U.S. Olympic Athletes.  Harrison is the author of INSTINCT Tapping Your Entrepreneurial DNA to Achieve Your Business Goals, and has appeard on CNBC, CNNI, Bloomberg and Forbes.com discussing his book.

Harrison was recognized with the 2006 Distinguished Alumni Award and where Harrison received an Honorary Doctorate in 2007, the highest honor an American University grants to an individual.  He is a recent recipient of the prestigious Ellis Island Medal of Honor, and has been honored by Long Island College Hospital, The Children’s Hospital at Montefiore, The Lymphoma Research Foundation, New York City’s Health and Hospital Corporation, Mt. St. Vincent’s College, the New York Academy of Medicine, and the New York Arthritis Foundation, each for his philanthropic work.