The Cessna Citation Bravo, one of the best-selling light private jets, is both extremely fuel efficient and convenient for short-range trips. The Bravo is Cessna’s upgrade of the Citation II, and it builds upon the framework of that legendary aircraft by adding more powerful engines, updating the avionics system, and improving comfort for both passengers and crew. The Citation Bravo was produced from 1997 through 2006, and hundreds remain on the market today thanks to a strong reputation for being reliable, simple, and cost-effective.

The Citation Bravo’s cabin measures 4.8 feet high, 4.8 feet wide, and nearly 16 feet long for a total cabin volume of 278 cubic feet. It comfortably fits seven passengers, typically seated in club-four fashion with two forward-facing seats aft and a rear-facing seat opposite the main door. Each seat comes equipped with its own personal storage drawer. There is a fully enclosed lavatory in the rear of the cabin with a flushing toilet and a convenient compartment for holding coats and other carry-on items. There are several baggage compartments aboard that total a capacity of 73 cubic feet—28 cubic feet of internal storage and 45 cubic feet of external storage. That’s enough space for about seven suitcases, four golf bags, and a few sets of skis.

Passengers enjoy the Bravo’s quieter cabin. The jet features excellent soundproofing via an interior shell that eliminates fan engine noise, as well as a secondary seal added to the cabin door that decreases wind noise. Additionally, the Bravo’s airstairs have been widened and an additional step has been added to make entry even easier.

With the Cessna Citation Bravo’s powerful Pratt & Whitney PW530A turbofan engines, each producing 2,887 lbs. of thrust, the jet outperforms its predecessor in climb, cruise, and altitude performance. Those engines allow the Citation Bravo a range of 1,495 nautical miles when travelling with four passengers and NBAA IFR reserves—enough to complete nonstop flights including New York to Miami, Los Angeles to San Francisco, or Aspen to southern California. Meanwhile, the engines burn 13 percent less fuel than those previously used in the Citation series.

The Citation Bravo has excellent short runway capabilities, allowing private jet travelers to fly in and out of a large selection of small airports—and when they get there, they’ll enjoy a seamless touchdown thanks to upgraded trailing-link landing gear that makes taxiing on uneven pavement and landing smoother than ever before. Improvements to the jet weren’t just made for the passengers, but the crew as well. An easier preflight as well as easier servicing and maintenance tasks decrease crew workload.

The Citation Bravo got an upgrade in the cockpit with the addition of the Honeywell Primus 1000 avionics system, displaying flight and navigation data across three screens. The jet also comes fitted with new systems including a weather radar, digital maps, and traffic avoidance information. Pilots love the Bravo because it is easy to fly and can even be certified to fly with a single pilot. 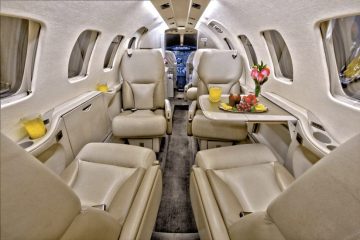